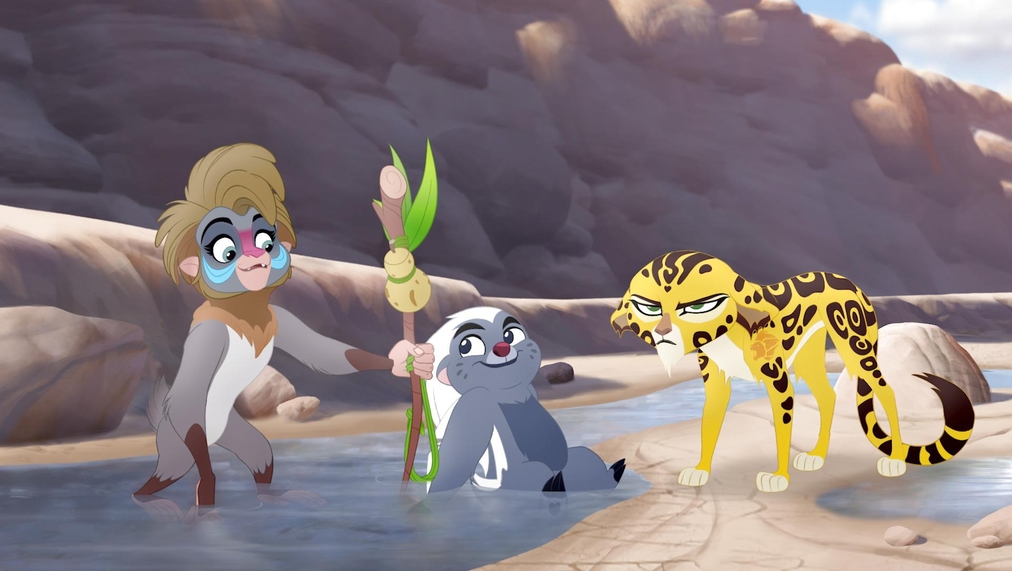 The Guard, lost in the desert, navigates by the stars.

I really hope that it gets uploaded to KimCartoon, so that I can download it with ease (downloading from here via VLC Media Player is a big figurative pain in the ass!).

This website could download all senson 3 but without episode 8
and it only have 720p
http://tvseries-download.co...
episode 1 could be downloaded on rarbg and it has 1080p
https://rarbgprx.org/torren...

Now that I got home from a long week of camp I finnally got to see this amazing episode now I'm really hyped for the other episodes when ever they come out. The Lion Guard and anything The Lion King is still really awesome to me even at the age of 18 and still a graduate from High school I'll always love anything Disney I don't mind at all that I grew up with Disney. It can be for anyone.

FINALLY!!!!! Now then when is the next episode XD

Finally. Thank you for uploading this.

http://chng.it/nMby5dqsvk
Come everyone lets work together

Of course i allso paid to get more subscriber

I think that lioness is her and next to her is Rani. 50% not sure.

What episode is that from? :O

We do not yet know. It comes from one of the future episodes and the pic is from a trailer.

It's from the trailer, I think it will be in the episode when ono and Kion will get healed.

god of all saiyans • 3 months ago

no its only ono in that episode

I think it's some sort of a guardian lion of the tree of life ,or maybe the oldest female lion in Rani's pride? Also she might be the healer that will get Kion to get better and Ono I think she is that Lioness that we get to see heal both of them.

This is the last season so I assume there will be a battle at the Tree of Life.

Anyone know when the other episodes Will release😅?

It can't be, Rani is leader of the Night Pride and has brown eyes, this lioness has green eyes and marking on her sides

The lioness does has brown eyes you need to watch the trailer again to see it more clearly since the picture is a little blurry.

Fatia The Cheetah • 9 months ago

I ship kion and fuli but the comments about them are kinda getting annoying. Has anyone noticed how Kion and Bunga aren't close friends friends anymore? I bet they miss everything being hakuna matata

Finally someone agrees with me! Kion and Fuli are cute but these speculations are just running in circles, in fact Kion and Bunga's faded friendship is the one that hurt me the most this season especially when I read their Disney wikias pages, one of Bunga's Likes is "Playing with Kion" but in Kion' Likes says "Playing baobab ball with Bunga (As a cub)". And also that Bunga is the one that has made Kion angry the most next to Makini.

Did you edit it?

When will next episodes be on episode 11 and upwards

SERIOUSLY NOW I AM 7TH WELL AT LEAST I SAW IT

Two prominent community figures, one of whom is voiced by Chris Jackson for his singing skills, and their spirited daughter, plus a synopsis that talks about navigating by the stars? I'm going to be very disappointed if Lin Manuel Miranda didn't help write the song.

I looked it up on the Lion Guard Wiki, the next episodes will be aired sometime in September.

When is rest of episode coming out

Anyone know when the rest of the episodes are gonna be released? I heard sometime in September (any exact dates?).

Nope all i heard was September too