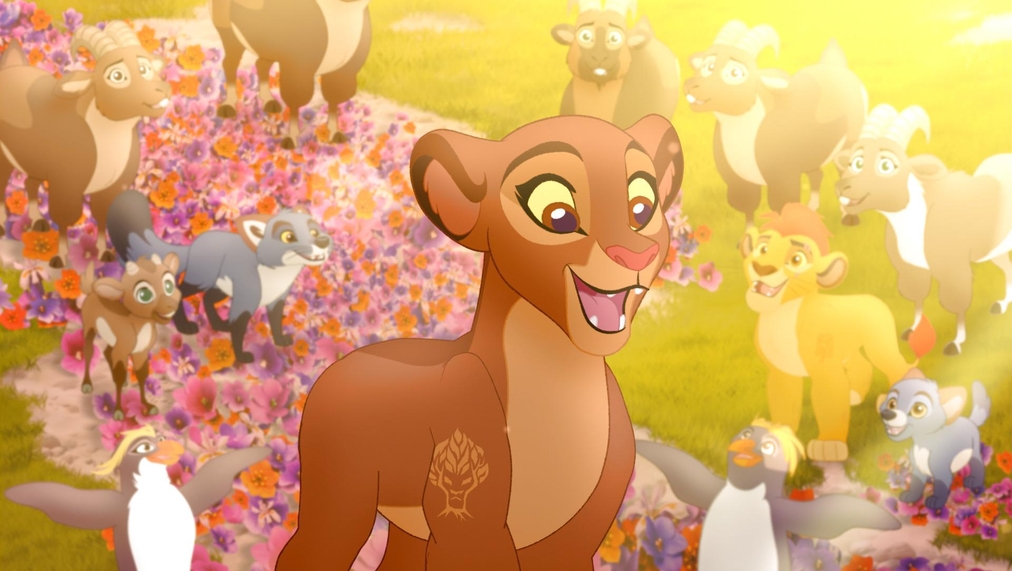 Omg I can't believe I am 18 years old watching a kids show, and I actually cried.

I am 35 years old and watching the show.

Yes in The Lion Guard are so powerful feelings.

now Sisi Ni Sawa we're the same you're also 18 wow and I also cried yet Disney is still very great at bringing emotions to me I grew up the most with The Lion King and anything Disney I'm obsessed with this show and I cried at the sad part it's sad though I'm happy that Kion was there for Rani I still really Ship Kion X Rani!

Yeah, Disney does bring a lot of emotions. Also I do ship them too, they're a ship in this show I can actually agree with.

Sisi ni Sawa Bro I’m 17 and crying my eyes out all day and night ever since I saw that episode. I’m even crying rn 🤣😭😭

i'm younger than you but i didn't cry LOL

The Commenter Dragon • 8 months ago

I know right, that was so sad, and to think this is the first time ever in the Lion Guard series that a characters had died on screen instead of off screen.

Ushari died on screen in the first episode of season three

Technically he did, yes, but his *death* wasn't shown on screen, only him falling into the smoke covering the lava. Janna straight up passed away on-screen.

Is that Kiara on your profile pic?

From LK2 that's her :) Not the Lion Guard character model.

Should have thurston came in and read this

Yeah! And then have him "panic and run'' at the end! That would have been worthy of a LOL coming from Thurston.

I thought there was going to be a hunting scene. There needs to be some of those.

I cant belive it kion was actualy crying . and it is beautifull I was almost crying.

When I saw Surak comforting Baliyo and crying, that was my face. I was just about to cry myself.

First of all just like the warning scene it was so intense! I was so in this episode also It's really really sad that I can't believe this is the 1st Disney Junior death scene that I saw onscreen!

Janna kion will never forget you

Yes, but the fact he only comforted Baliyo and not Rani as well sorta pushed my buttons. Other than that, A+ uncle in my book!

Who put onions on my desk..

I wonder what predators eat at the Tree of Life. They're not allowed to harm anyone, so they can't hunt!
In reality, the tigers respecting the Circle of Life would mean eating the muskdeer!

Respect the Circle of Life means yes, just not be wasteful. Take only what is needed.

KION AND RANI SHOULD BE TOGETHER!

Kion and Rani are perfect for each other

Queen Janna said Rani had everything she needs to be a great Queen. And a great Queen has a great king right. Well me theory is Queen Janna knew Kion and Rani where destined to be.

If Rani could not trust Kion then she could not develop feelings in Kion. Trust is the basis of friendship but also in a relationship when Rani began to trust Kion would treat Kion only as a friend and it would take a long time for Rani to fall in love with Kion.

Yes, but Rani started to trust Kion over time and it took a while for her feeling for him to develop. As Kion was comforting Rani in her grief, their relationship started to grow a while after that. So technically, all Rani needed to fall in love with Kion was a little trust.

Most viewers consider Rani to be the best person in all Night Pride, and they describe Rani as the perfect partner for Kion, the truth is different because Rani attitude towards Kion was very bad from the very beginning when Rani met Kion, but Rani did not know Kion and was strange to her. a person but look at
the rest of the behavior Night Pride, Rani did try to change her attitude towards Kion, but only when Kion showed support and care for Rani, also Kion did not pay attention to how Rani treated him when Kion was right, he did not use it and allowed himself to manipulate, for example, when Rani attacked without warning Kion and his friends
Rani additionally accused Kion of using the roar on Rani brother but also Rani did not even notice that with her aggression she put her brother in danger but Kion blamed himself for Rani stupidity in addition Kion did it 3 times in the series