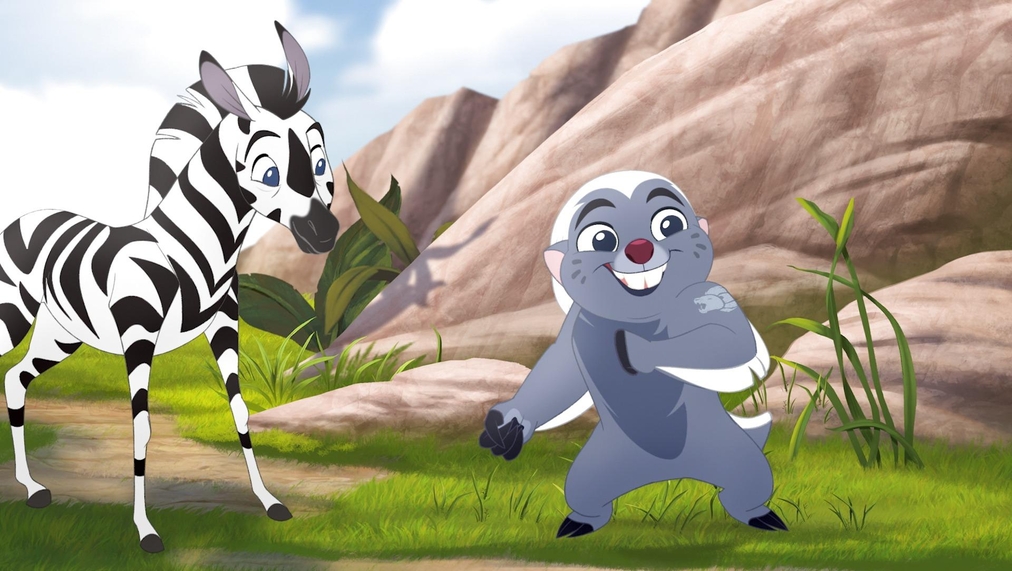 Bunga is put in charge of several young Pride Landers.

Bunga always annoyed me. Even before I was in the Lion Guard, he annoyed me. He's a good friend, but just a little annoying. Actually a LOT annoying.

I have a question for you. What was the most annoying thing Bunga ever did to you?

Hmmm. Alright, time for a story. I'm out hunting, minding my own business, when Bunga comes up behind me and asks if I want to eat a bug, despite me telling him "no" a thousand times already! Well, that startles me and the gazelle I was tracking, and so, as usual, my lunch escapes. And people wonder why I'm so skinny! Anyways, I decide that I'm not going hungry today, and so I chase after it. But Bunga, that persistent little thorn in my side, grabs my tail and once again offers me this disgusting little grub thingy.

I shake him off, but he still can't take a hint, and that stupid little idiot grabs my LEG as i'm RUNNING! I don't need to tell you how stupid this is, since you probably already know. I trip over him and go flying into the local watering hole. Only, it's the dry season, so it's dried up. So now I'm lying in the bottom of this big, muddy ditch. I try to climb out, but just slide back down again. So I yell at Bunga and tell him to help me out. He can't reach me from where he is, so he says he'll find a long stick that I can grab onto. Well, he takes his sweet time with that! I was in there for hours!

Now, I can't be sure what he was doing, but Bunga said later that he was GOING to find a stick, and found a nice big log, and then stopped for like, fifteen minutes, eating every single bug in the log! Once he was done, he had forgotten what he came there to do, and so went off to ask me what I asked him to do. But then he gets lost, and somehow winds up in the Backlands. So then, he runs into Makucha, who tells him to turn around. Bunga tells me he "beat up that leopard." Ono, who was out looking for him, says that Bunga was the one getting beat up. But this is all second hand, so I can't be sure. So then Ono grabs him and flies him back to the Pridelands, where he goes back to Hakuna Matata Falls to have DINNER! Again, all second hand, so i can't be sure. But to be fair, these all seem like things he'd do.

I would have had to spend the night in there, had Ono not found me. He got the rest of the Guard to come over and help me out. And once I was out of there, I smacked Bunga like I'd never smacked before!

Yeesh! And I thought when he farted in your face that one time with the gorillas from The Lost Gorillas was the most annoying thing he did to you! I'm sorry he ditched you like that to you, Fuli! You didn't deserve that! If I were there, I would have saved you instantly. Whenever you want to talk to me, I'm all ears!

Wow! That actually sounds like something my older brother would do! He's also a thorn in my side and there are times when I also want to smack him! So, you're saying that Bunga was supposed to help you out of a ditch, but ditched you? Sometimes, Bunga can be so darn ANNOYING!!!! Sorry he did that to you, Fuli; you didn't deserve that! And I thought when he farted in your face that one time with the gorillas was the most annoying thing he did to you.

Hamu: Your It!
It: Did someone call me?

Have you seen the Little guy?
What you can say about that episode?

you can pick Awesome! or Awesome! which one

because hes the leader egg head

You know, there was one little detail they cut from this episode. While Bunga was off doing whatever, Kion told me to try and climb a nearby tree to get a little fruit at the top. Somehow I agreed, but my claws got stuck in the bark! Nobody could get up to me and get me down, so we had to wait for Bunga to get back so he could come and pry me off. When he did, though, the bark I was stuck to came with me, and I slid down a hill into a river on it. The editor cut that out though, for reasons I cannot explain.

Is Muhimu going to be in the next episode.

09:57 he's actually healthier than I thought!

you know, i kinda thought he was going to babysit the jackels

It's awsome that they are making another season.

I just like the parents are having a spa but in the pride lands.

Cytix Artz And Games • 2 years ago

Agreed id surely want to do that :33

Cytix Artz And Games • 2 years ago

As would I! He and I would probably have some pretty amazing adventures!