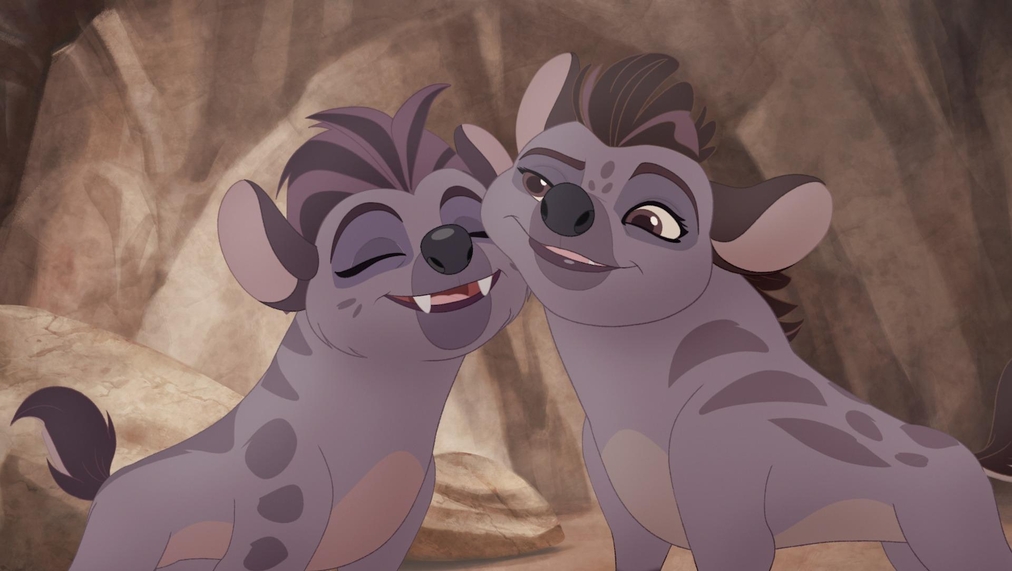 Jasiri is the most adorable Hyena in my opinion(is that weird?)

Nuuuuuuuuuuu its not weird =w=

Yes that is vary wired

Nah, the cubs are better. (S2E9; Rescue in the Outlands)

No, you are not weird because Jasiri is a beautiful hyena.

The Commenter Dragon • 1 year ago

Now that there's a Hyena resistance,this means once again the Lion Guard will be one step ahead of Scar and his army at every turn.

But what if jasari KILLS SOMONE

Oh bothair. Janja was my favorite villain but it might be cool to see him turn good I suppose.

He still young unknown of their ages but he still learning

NO Janja is the dumbest leder

that's true will just have to wait and see

Or why did Janja took back Nne and Tano? Even in their own episode role they didn’t seem to know the Lion guard even though they met before

you I've been thinking the same thing but i think it's nine.

I think that every episode that has Jasiri in it is going to be a fan favorite. I have a feeling that Janja will join Jasiri's Hyena Resistance since she saved him and they have to stick together. As Jasiri always say: Sisi Ni Sawa.

I so do hope that Janja joins Jasiri's resistance!

I hope in other episodes, Janja will start feeling like he is lower than Scar, and he doesn't like it. He secretly "escapes," but they catch him again, so Scar is really mad and is going to do something(maybe even murder, in a subtle kids way), but something happens(probably involving the lion guard trying to save something) and he escapes again, with or without his clan. Actually, it would be cool if he did this alone. So he travels to Jasiri's place, ashamed, and talks(or confronts) her. Maybe before that, her clan thinks he is coming to kill her again, and tries to kill her. Then he goes to his territory and somehow his clan is there... ? But um, then he SOMEHOW gets re-accepted into the PLDG(Pride Land Domination Group) and after a bit he decides to relay info to Jasiri, then to the Lion Guard. The LG is skeptical and they dont really trust Janja at first, but soon accept this arrangement. Also there is NO romance between Janja and Jasiri. Its a strictly business relationship. And Janja still kinda hates her for ruining his plans and stuff. Did u like the theory/suggestion?

Another amazing episode!,But every episode featuring Jasiri is great, not only the character is likable and memorabble but Maia Mitchell's performance is amazing!,And i honestly still can't belive that there are people who hate this show considering all the talent they recruited for guest spots:like Amanda Waller!(cc h pounder as Kongwe!),Renée Elise Goldsberry!!!!(We hawe way to mutch celebrityes to keep track of so they appearing in shows like this make iut easyer and if i learn something new from a show it's a bonus like Agent and anti Venom along with Mr. Negative in ultimate spiderman!(no disrespect to Josh Keaton but when he speaks sometime it's hard to belive that he's character used to be a lame geek and sound to Cool.,and even if people hate it they can't denie Drake Bell wase an amazing spidarman, with the right amount of badassness and geeky flare!)

Woah! great episode! It was cool seeing Jasiri save Janja even though he done bad. To me it will be quite cool to see Janja join the good guys Jasiri and her Hyena Resistance and The lion guard who knows maybe or maybe not I think he will soon though I think right now he is just nervous and Scared of what the other outlanders will do. what they will think of Janja doing good. but I hope he joins the good side. we will for sure soon see I hope.

Wow this episode was amazing! I like the part where Jasiri saves Janja, I wonder what'll happen nxt would be funny if Janja joins Jasiri and the lion guard? 😂🤣

I would like that him being good that to me be cool to see like I said in a comment on here maybe he will soon right now I think he is just nervous and Scared of what the other outlanders will do. what they will think of Janja doing good.

The Commenter Dragon • 1 year ago

But then the lizards (spies) will know. I think that Disney should keep its theme for a while, than change it up a little. :)

you mean the skinks...

yep, his "allies" keep pissing him off

Janja needs to know the truth of Scar's death

I think that’s the first time we saw Scar getting angrier and roars at Janja as the volcano erupted.

he was part of an earlier lion guard. perhaps he didn't lose all of his roar power! That's not good.

Can it. Jasiri and Kion are just friends. And I mean it.

Kwetu ni Kwetu means to us belongs to us.
Tell me if you need to know what the other phrases mean.

It makes me mad